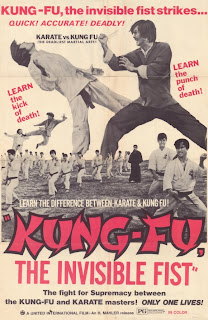 Plot: Lee Chang is a police captain sent to Shanghai (with his second-in-command, Su Dong) to investigate Lin, an underworld figure running a white slavery racket. Meanwhile, this same racket has also been infiltrated by Jian Tai, a Japanese operative (nicknamed "The Hungry Tiger") who is using his newfound position as a henchman of Lin's as a base from which to relay maps and information regarding Chinese naval bases to his superiors back home. Tensions mount as Lee Chang and Jian Tai begin to suspect each other, leading to an inevitable showdown.

If you watch enough old chop socky flicks - especially those from Hong Kong (HK) - you learn to hope for the best and brace for the worst. So much of the 1970s HK output was a blur of muddled and incoherent storylines, unimaginative fight choreography (from the Jump In Front of the Camera and Wave Your Arms Around school), and a seeming attitude of total indifference towards the audience. In short, even the most ardent kung fu maniac often reaches a point where they ask themselves: "Why do I watch this shit?"

Thankfully, a movie like Kung Fu, The Invisible Fist comes along to restore your faith. While nothing earth-shattering, it nevertheless comes across as a solid and sincere attempt at being an all-around good movie, while also delivering the genre goods. In a field marked by stylistic excess at the expense of substance, this one has everything the average viewer should expect in the right proportions.

Although Lee Chang is the hero in this tale, his sidekick Su Dong provides the heart, as he shows compassion for the story's marginalized figures. (He frees Anna, a white slave girl from Russia, and makes himself a friend and guardian of the lowly dock workers employed by Lin.) While Lee Chang becomes increasingly concerned with national security, Su Dong acts with an obvious concern for social justice. Because he truly cares about the people in this movie, so does the viewer.

Because of the above, the inevitable elements of kung fu cheesiness and unintended laughs are welcome - even endearing - rather than irritating. Witness the following snatches of ludicrous dialogue:

Su Dong: He was bragging about his karate. It's no good. I can't stand it!

Or, as hero and villain square off just as the climactic fight gets underway, some down 'n dirty trash talk, HK-style:

Jian Tai: You know, in Japan, what they call me there? It's "The Hungry Tiger".

Lee Chang: Oh really? I have a nickname too, "The Crazy Dragon".

And while I'm not one to find mirth in human trafficking, a scene where struggling slave girls are being forcefully stuffed into wooden crates comes across momentarily as an oversized game of Whac-A-Mole as they randomly stand up only to be shoved back down. Guilty snickers, indeed.

All-in-all, a well-made and engaging film with a welcome dose of humanity and competence.
Posted by James Deagle at 5:33 AM