One week with Solaris 10

For quite some time I've had a largely-unconsumated love for Solaris 10. The reasons for this are many, though for the most part it comes down to a sense of awe at the software and hardware engineering legacy of the late Sun Microsystems, a more basic urge to kick the tires on a corporate-driven UNIX (as opposed to the sundry open source "Unix-like" systems that I've been using for years), as well as an inexplicable crush on CDE, the so-ugly-it's-beautiful desktop GUI.

(The last reason is probably the most salient, as I've had more than my share of experience with OpenSolaris and OpenIndiana, which are indeed as SunOS as any of the "official" versions of Solaris, but with the Gnome desktop and bash as the default shell, these systems have always seemed - to me, anyway - like UNIX trying to woo the Linux crowd. Solaris with Red Hat Enterprise Linux window dressing, if you will. Having said that, OpenIndiana rocks my world, and is always the port of call to which I return after bouts of compulsive distro-hopping.)

Unfortunately, any time I ever installed it, it was never long before I bailed and installed something else over top of it. Why?

My best answer is that despite my self-proclaimed "catholic taste" in UNIX systems, I've become accustomed to the bells and whistles of the fancier systems, be it the SunOS 5.11 strains of Solaris, or even Linux Mint, which despite some unstable behavior (on my laptop, at least), puts up zero resistance for those who want to stop dicking around and simply get stuff done and have some fun afterwards.

And so whenever I had booted up a fresh Solaris 10 installation, I was left somewhat cold by a system I had yet to fully comprehend. (How do I install packages on this thing? How do I assign root privileges to myself? How do I enable wireless networking?) These brief forays into the world of Solaris 10 consisted of a few minutes of adoring the retro utilitarianism of CDE, and then retreating to whatever other OS had my confidence at the time. 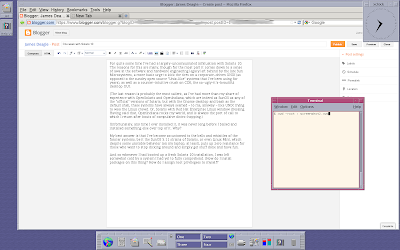 A screenshot taken with the xwd tool while writing this post
in my current Solaris 10 installation.


Particularly over the past few months, however, I've had this nagging feeling that I jumped ship prematurely, and have never given myself a chance to simply experience Solaris 10 for any extended period of time, and at least learn a thing or two about it and CDE.

With that in mind, I am commiting myself to keeping this current Solaris 10 installation for at least one week (starting today), and exercise a bit more patience in working through whatever roadblocks crop up. As the week progresses, I will pursue the following goals:


Along the way, as I try to resolve any problems, I'll report my findings here, thus guaranteeing no date to the prom as far as my readership (all three of you!) is concerned.

My one caveat is that I reserve the right to boot up a Linux Mint live DVD for certain tasks that Solaris 10 simply isn't up to (yet) on this machine, such as word processing, watching YouTube videos with reasonable smoothness, or creating/handling multimedia files. As the week (or beyond) progresses, I'll work towards being able to do more (or all) of these things within Solaris 10.

In fairness, Solaris 10 reflects the needs of the late 1990's and early 2000's system administrator, rather than the desktop user here in 2015, and so while I'd love to get this system to a point where I can use it instead of newer, more Linux-like alternatives, for the sake of my one-week experiment I will ease up on my expectations and remember to experience (and appreciate) it on its own terms.
Posted by James Deagle at 8:11 PM