One Week with Solaris 10, Part 3: Post-Mortem

As of this writing I have just gone 'back to the future', as it were, and am now running Oracle Solaris 11.3, the latest commercial UNIX offering on the market as far as x86 processors go. There is much about Solaris 11.3 that is way over my head, and a good part of it I simply won't be using. (All that 'cloud server' stuff doesn't concern me, as I'm looking to take it for a spin as a general purpose productivity desktop. As of right now I have LibreOffice, Emacs, GIMP, Scribus and vlc installed, and will try to push the envelope with getting Audacity, Blender and Inkscape installed, even if it means building from source.) 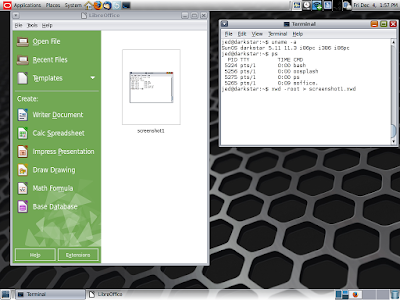 Good to Go: Oracle Solaris 11.3 with the
sfe.opencsw.org build of LibreOffice installed.

All of the above, including downloading the 11.3 .iso, was done via my neighborhood Starbucks' wifi signal. (This was my way of making them serve a penance in case the CBC story about their supposed "greenwashing" is true. Tee-hee!)

Because LibreOffice is Solaris 11.x's 'missing link', you can follow these steps to get it installed from www.sfe.opencsw.org:

While this Solaris 11.3 install has gone swimmingly, particularly seeing as it now has 90% of the applications I normally need or want, I look back on my week with Solaris 10 with fondness for the retro-UNIX experience it afforded, as well as a palpable sense of relief at being able to move forward with using my laptop for something other than figuring out how to do stuff. My extensive (for me) experience with OpenIndiana (151a9 as well as Hipster) leaves me in a very good position to charge ahead with Solaris 11.3, as so much of it is the same. (Solaris and OI are both SunOS 5.11-based.)

The only thing preventing Solaris 10 from staying on my laptop any longer than it did was simply the differential between the seemingly Byzantine art of installing the programs I need to be truly productive and the level patience demanded (of me) to see it through. (Also, I never did figure out how to enable wireless networking, which was the final nail in the proverbial coffin.) As far as I can tell, Solaris 10 comes with no package management system out-of-the box. Installing Firefox 38.2.1 from www.unixpackages.com, for example, involves following a process of uninstalling the old Firefox and then unpacking and installing the new one. While that process is probably no sweat for a seasoned system administrator, it is heart-pounding for an OS-dabbling shmuck like me. Despite successfully upgrading Firefox, in the process I also shot Thunderbird out of the sky, and was unable to bring it back.

Otherwise, Solaris 10 was a joy to use and get to know, and after a few days I felt far more comfortable with it than I would have expected. Before long, the Common Desktop Environment (CDE) felt like my 'new normal'. And compared to Solaris 11.3, overall it was fast. Like, speeding ticket fast. (Solaris 11.3 takes a long time to boot on this machine - a ThinkPad T61p - and Solaris 11.2 wouldn't even completely load. Perhaps in the latter case there was a problem with the iso?)

A collateral benefit from trying to figure out Solaris 10 is that I also learned a thing or two about getting things done on SunOS 5.11 systems (be they illumos- or Oracle-based), and I'm sure there's sundry other little things I've brought back across the chasm that escape me at the moment.

The new road ahead

And so I'll try living with Solaris 11.3 for awhile and learn as much as I can. As it stands right now, it is already serving my productivity needs, and so my goal will be to make it as much of a multimedia desktop as possible (hello, Audacity and Blender).

In the longer term, however, I can't bring myself to abide by Oracle's proprietary licensing conditions, which are geared towards larger organizations who would benefit from paying for the support and upgrades that Oracle offers. At the end of the day, I'm a Free and Open Source Software (FOSS) kinda guy, and so this ongoing foray into the proprietary realm makes me feel a strong twinge of guilt at contravening my ideals.

(I don't fault Oracle for their licensing choices - they exist to make money as they see fit. On the other hand, bringing Solaris back into the proprietary fold after having been open-sourced under Sun's stewardship, as well as killing the OpenSolaris project, has probably come at some cost to its community of users. As for myself, it has taken a number of years for me to be able to say 'Oracle' without wanting to spit. Former Sun engineers, such as Bryan Cantrill, go to much further lengths to express their disdain. As for the official Solaris brand, Oracle has made a legion of detractors out of those who were once passionate ambassadors, people who are now putting their all into the illumos project.)

Nevertheless, my objective is to be able to get more involved in the OpenIndiana/illumos community, particularly by submitting informed bug reports to OI's Hipster test branch, as well as assisting in editing and writing documentation if they have enough faith in my editorial skills. And so given that OpenIndiana aims to closely mirror the Solaris 11.x experience while also improving on it, having a good dose of direct interaction with Solaris 11.3 can only serve me well in my endeavors with OpenIndiana.