The universe is governed by the forces of irony.

At least that's the notion I publicly subscribe to, as it allows me sufficient cover to rail against full-bodied desktop environments (and champion primitive window managers) in one post, and then in the next one do something really cute, like report on the installation and use of a full-bodied desktop environment, in this case Xfce 4.12. And then if anyone calls me out on my BS, I can simply point to this self-created God of Irony, who will respond to my detractors with a simple shrug of His celestial shoulders and bathe us all in His ever-loving gaze of indifference.

In all seriousness, there's Unix users, and then there's human beings, and so if you're setting up user accounts for the latter on a given machine, particularly with limited exposure (if any) to Unix, then a desktop environment is the best way to ease them into it. (Put another way, let their first Unix experience be what Linux blogger Penguin Pete once dubbed "I-can't-believe-it's-not-Windows!") 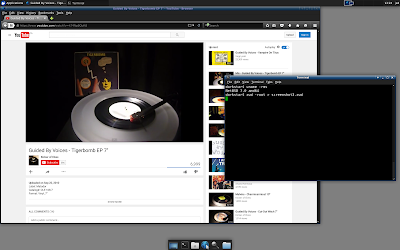 Xfce 4.12 in action: A good 'default GUI' choice for guest accounts on your machine,
but not without some issues that keep it from being the author's 'go-to' desktop
environment, assuming he'd want a desktop environment in the first place.

As for the installation, I followed the steps laid out in slice2's appropriately-titled blog post, HOWTO install the XFCE 4.12 Desktop on NetBSD 7. Unlike the procedures for installing Flash, there are no hiccups or deviations to report here. I followed each and every step exactly as written by slice2, and was up and running with Xfce 4.12 in no time. (Some of the steps didn't apply, as the post assumes you're starting from a fresh NetBSD install with nothing added or configured, so to be more exact I followed all of the relevant steps.)

All-in-all, Xfce 4.12 on NetBSD is good, but not without a blemish or two.

For starters, I'm not keen on the default theme, ("Xfce-dusk"), but that's a non-issue easily addressed via the theme manager dialogue box. A slightly more serious issue, if appearances matter, is the fact that I'm unable to change the desktop background from the default solid grey to either a different color or image. One of the key elements of a desktop environment is personalization, and although I live in a snoozy government town, I don't feel like a dull grey desktop background truly expresses my inner self. (I could be wrong.)

Although I'm confident the solution is one Google search away, I've been avoiding that route in the interest of getting a sense of Xfce's ease of discoverability. After all, if it is geared towards being usable by general as well as technical people, then an external search engine shouldn't be required to find out how to do something as trivial as changing a background. I've used Xfce on many BSD and Linux distros, and have never encountered this sort of roadblock.

Another irritant here is that I can't use Alt-Tab to cycle through windows, which one would think is an easy way to help level the learning curve. Again, I swear I remember this feature being available in other Xfce implementations, so I don't know if the Xfce project has decided to drop the feature in the interest of self-defeat, or if it's just a rough spot in the NetBSD implementation. Either way, I'm not a fan of having to take a hand off the keyboard to move the mouse up to the task bar when a fairly standard keyboard shortcut exists in other implementations of the same environment.

And finally, for some reason this incarnation of Xfce 4.12 requires you to type soffice in a terminal window to activate LibreOffice, rather than having it available in the Applications drop-down menu. While I'm in no way adverse to command lines (as the vain muscle-flexing of my previous post made abundantly clear), any self-respecting desktop environment should make a major productivity suite like LibreOffice available within a series of mouse clicks, and as few of them as possible at that.

Beyond the above complaints, I have nothing bad to say about Xfce 4.12 on NetBSD 7.0, per se. If you're looking for a usable default GUI for a 'guest account' on your machine while entertaining inlaws for the weekend, then you can't really go wrong with Xfce. As for myself, the issues outlined above make it seem incomplete, therefore keeping it from being my 'go-to' desktop environment.
Posted by James Deagle at 1:17 PM