UPDATED! Solaris 11.3: Firefox, Flash, and the distant dream of gcc

After a prolonged spell of flitting about with various distros, I have taken up once again with Solaris 11.3 as my main desktop, this time with an eye to satisfying two modest goals:

As for the first goal, the answer was under my nose for longer than I'd care to admit. As written about in this space previously, the good folks at UNIX Packages provide Firefox and Thunderbird binaries free of charge. I had gushed quite profusely at their Firefox 38 package on my last install of Solaris 10, but more recently had revisited their offerings, and saw no Firefox/Thunderbird options for Solaris 11.x. The available systems were for OpenSolaris and Solaris 10 (and older). Hmmph!

And then it hit me: Solaris 11.3 may be binary-compatible with (what had been) OpenSolaris, and so I took a whack at installing that package to this system.

As for the installation, simply download the package for Firefox 45.4.0 (the latest as of this writing), and then within the Nautilus file manager, right click on the downloaded *-pkg file and select "Extract here". Once it's extracted, use Gnome Terminal to get yourself to your Downloads directory (or wherever it lands in your system), and enter:


It goes without saying that you should adjust the wildcard as necessary if you have other files starting with "fire". (This moment of patronizing didacticism has been brought to you by the Ford Motor Company. Find the right Ford for you at www.ford.com. )

To make it run by default (at least when clicking the little Firefox icon in the top taskbar in the Gnome 2 interface), I right-clicked on said icon, selected "Properties", and changed the "Command" field to read: /opt/sfw/bin/firefox %u. 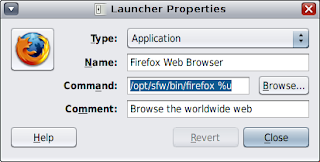 Akin to the goal of upgrading Firefox, a solution to my Flash woes had likewise been lurking about just beyond the perimeter of my patience and reading comprehension. Over previous sojourns with this OS, I had come to understand that Adobe had dropped Solaris support for Flash altogether (which it has), and that mummified versions of Flash were available in their archives, which is also true, though with God as my witness I was sure that said archives were now unavailable. Silly rabbit.

Once you have downloaded and extracted the files (be sure to look for version 11,2,202,223), you'll need to move libflashplayer.so to /opt/sfw/lib/firefox/browser/plugins. (I had to create the plugins subdirectory myself, as it wasn't there by default after installing Firefox.) Check here to confirm that it is working.

All-in-all, I'm quite pleased with Solaris 11.3 this time around, and am now readying my mind to tackle the real challenge, which is getting gcc installed after previous botched attempts. As it turns out, the gcc versions I've found so far can't be installed in this system due to licensing conflicts or some such, which is a drag because I'd like to then proceed with building packages from NetBSD's pkgsrc project to allow for at least a bit more variety of applications.

But that can wait for another day.


October 23, 2016 update: Eureka! The dream of gcc has now been realized! Install it as follows: