Never in my wildest dreams did I think that a post about an "antiquated" desktopenvironment would go viral (by this blog's modest standards). Less than two months later, it has attracted almost 24,000 pairs of eyeballs, followed by the next most popular post, which comes in a distant second at just over 2,000 hits after twenty months. The lesson here, I believe, is that if you target a drastically underserved readership (in this case, those of us enthralled with museum pieces like CDE), you may be pleasantly surprised by what the resulting analytics have to say.

Regardless of how "ugly" or "outdated" (and therefore not "newsworthy") you may think CDE is, it is now just a few years into its new life as an open source project, and may see tweaks and improvements that never would have occurred had it remained strictly a commercial product on life support.

Setting all that aside, the sudden readership spike noted above speaks for itself, with no justification required for CDE as a "current" software news topic in 2018.


As you may recall from that last post, one of my first orders of business was to create a custom color theme to reproduce the UnixWare 7.x default theme (minus that system's unique desktop switcher). In retrospect, making an OpenBSD system resemble a product once owned by the patent-trolling SCO is akin to making Black Lives Matter activists go to a demonstration dressed in Archie Bunker costumes.

Before long, however, I was creating yet another custom color theme, this time based on Solaris 10, an operating system that is much, much closer to my heart than UnixWare will ever be. (My fondness for UnixWare's default CDE color theme notwithstanding, don't ever let anything with SCO DNA close to your heart. In fact, change your phone number and take out a restraining order.)

In this case, the shortest distance between Point A and Point B was to start with selecting "Crimson" from CDE's out-of-the-box color schemes, which as you'll see gets you 90 percent of the way to a faux Solaris 10 box: 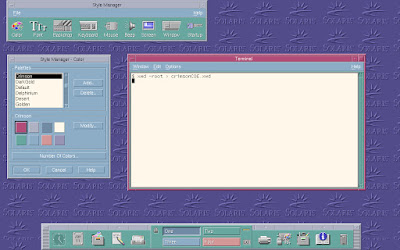 The offending portions of the Crimson color scheme (from a Solaris 10 point of view) is the light green on the front panel and Style Manager background, and the light blue Style Manager - Color window and the Terminal menu bar. This is easily rectified by selecting one of the inaccurate colors from the color palette within Style Manager - Color, clicking on Modify, and then Grab Color in the resulting Modify dialog box - doing so will give you a crosshairs cursor with which to click on the desired color (if its visible anywhere on your screen). This was the process I followed to create my UnixWare-styled color theme, for which I simply used some screenshots of that system to get the desired shades of blue and orange. In the case of getting your Solaris 10 theme up to snuff, the light green and blue in the palette should be changed to light grey, as shown here: 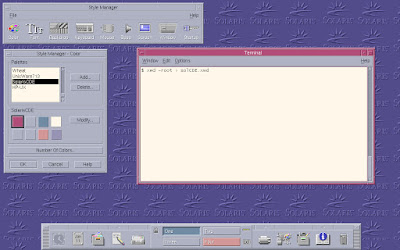 Besides getting the colors right, the one remaining order of business (assuming you want to go all in on the Solaris 10 aesthetic) is to select Solaris10 from the Style Manager - Backdrop dialog box, which in this particular case was my starting point.

Giving HP VUE its due


As a reader correctly pointed out in the comments under the original post, many people are accustomed to thinking of Solaris (pre-11.x) as having been the de facto CDE implementation, forgetting that CDE itself began life as a fork (or continuation) of HP's Visual User Environment (VUE), which was subsequently rechristened the "Common Desktop Environment" (or CDE) once Sun, IBM and others joined in. In fact, looking at screenshots of VUE, it is apparent that HP had already done the heavy lifting prior to bringing on collaborators. Unfortunately, I've never used VUE nor even seen a video of it running, so I personally have no idea what changes (beyond visual teaks to the Front Panel) went into CDE.

Nevertheless, as I said in my reply to that reader, "...I'm guessing that most people associate CDE with Sun because Sun CDE was much more available to the average person during its "strictly proprietary" years via Solaris due to it being available for x86 machines. Unless I'm mistaken, HP-UX has always been dependent on HP architecture. Add to that the fact that Sun may have had more of a "cool" factor due to many of its innovations (Java, zones, ZFS, etc.) that served to boost its own profile and in turn that of its CDE implementation.

"As for me, I know I have been guilty at times of thinking of Sun as being the de facto CDE vendor, that may also be because I've been a Sun fanboy for quite some time."


I started writing this particular post as an html file in vi, and for reasons unbeknownst to me that terminal window kept crashing. Therefore (and at the risk of contributing to the usual UNIX text editor religious war), my finishing laps were done in Emacs, which gave me no stability problems whatsoever. 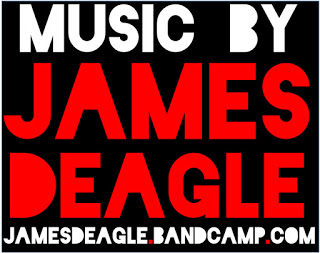