It has been speculated that Ann Coulter's 2015 book, ¡Adios, America! The Left’s Plan to Turn Our Country into a Third World Hellhole, provided what would become the blueprint for Donald Trump's election platform. In that tome, she advocated certain views on immigration that should seem familiar to Trump-watchers by now.

Whether or not Trump cribbed his policies from Coulter, each are akin to the worst kind of person you knew in high school - except that while most of those faces from the past went on to outgrow the very qualities that made them hard to be around, malevolence for personal gain (be it wealth, political power, or readership numbers) is something that continues to define Trump and Coulter in their professional lives. And in certain ways, the two are spiritual twins.

Their shared knack for body-shaming is but one example.

Trump has by now well-established himself as a pig who views each woman as a sex object, and can't resist letting the world know it by publicly insulting female critics on the basis of their physical appearance or even their menstrual cycle.

Conversely, as Coulter recently tweeted on the topic of the post-election anti-Trump demonstrations, "Without fat girls, there would be no protests." (This from the same woman who feels the need to present herself as Republican Barbie® on the covers of her books, perhaps as some Pavlovian attempt to condition would-be readers to salivate at the ugly content within.) 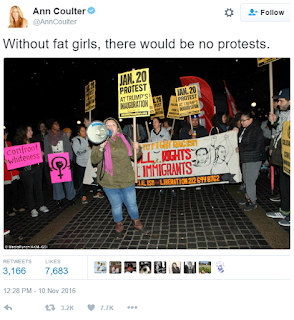 For all the gushing Coulter has done over Trump, is it possible that she has failed to realize that many of the women who comprised Trump's base may have had less 'perfect' physiques than hers? Does it even matter to Coulter that many women, especially those in their teens, may have feelings of anxiety that are triggered by such public comments? (Empathy is a tall order for any sociopath, so I can't imagine Coulter meeting such a question with anything more than a vacant gaze. Someone of her ilk is only concerned with their own notoriety, and will get it wherever they can, no matter how low the road nor how easy the target.)

Boiled down to her true essence, Coulter is nothing more than a bully working on behalf of those too powerful to need defending in the first place. Put even more succinctly, she is simply a fascist.

For all the nastiness he exhibited during the primaries and the general election, Trump at least seems to have a human side, which gives me hope (however faint) that he may surprise his critics by accomplishing something in the course of this term that is truly an evolutionary step forward for his country.

As for Coulter, it is hard to imagine her even wanting to use her pulpit for bringing about positive change in anyone's life other than those who would have the middle and lower classes continue to be turned against their own interests.

If America is indeed great, it is because of people who do things that are innovative, courageous, or otherwise transforming - it is certainly not because of high-profile misanthropes buzzing like flies around the dung heap of America's worst instincts. And so in body-shaming her sisters of a different political bent, Ann Coulter has shown us all that she has earned her wings, fecal stink notwithstanding.
Posted by James Deagle at 6:03 PM