Lately I've been stumbling across some old gems for my Why haven't I heard of this before? file. One such example is The Effigies, a punk outfit from Chicago that has been active on-and-off since 1980. I've been repeatedly listening to Haunted Town, their 1981 debut, for a few days now. This 12"vinyl  EP has basic (but solid) production values that stay out of the way and allow this furious sonic assault and its constituent voices and instruments to burst forth with heft and clarity. What follows are just my initial impressions, and not a review, per se. 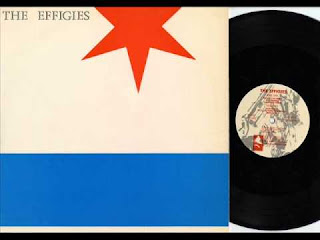 Beyond the above I don't know a whole lot about The Effigies - all I have to go on is the sounds on this awesome EP. The opening, Below The Drop, kinda/sorta reminded me at first of Warsaw by Joy Division, though in an increasingly tenuous way now that I've given the latter a fresh listen for the sake of comparison. (The two songs don't really sound alike, but something in the energy made me perceive some sort of sonic resonance between the two.)

Next is Strongbox, which may be the fastest cut of the five, and as such it comes the closest to being true 'hardcore'. (I'm not quite sure what exactly the "strongbox" in question is, but then with a firecracker like this, lyrical interpretation trails well behind jumping around, smashing things, or getting a speeding ticket.)

The title track slows things down ever-so-slightly with some sort of narrative about urban decay, and provides some bona fide lead guitar melodies that act as a welcome counterpoint to the relentless drive of the song.

On Mob Clash the lead vocals are vaguely reminiscent of Joe Strummer of the Clash (oddly enough.) A less metallic rendition of this strident tune may not have been out of place on London Calling, the album on which the Clash showed how punk energy and sensibilities could be 'tamed' and channeled into making the greatest rock n' roll album, ever. Needless to say, this is my favorite cut off Haunted Town.

And finally, We'll Be Here Tomorrow appropriately closes out this brief set, perhaps intended as a calling card of sorts at the time. Nothing much to say about this one other than the reverb-soaked vocals have a certain quality that places  the track well within the milieu of late 70's/early 80's punk and new wave. (I don't mean this to say that it makes the song dated, but rather that it imbues it with the distinct aroma of its time, a time for which Yours Truly is quite nostalgic, musically.)
Posted by James Deagle at 1:19 PM