I'm still hanging in there with this installation of OpenIndiana Hipster, which I've been upgrading (via # pfexec pkg image-upgrade -v) at least once every other day, and sometimes every day. 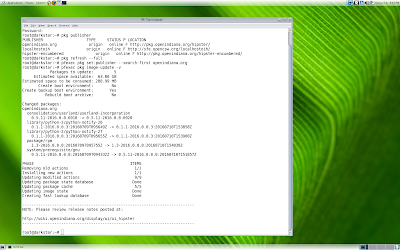 Here are some random notes from this leg of the journey:

One thing I've come to appreciate is how this ThinkPad T61p seems to run at a lower temperature under OI Hipster than other operating systems. Whether it's Oracle Solaris, NetBSD or Linux Mint, normally you could probably fry an egg off the far left edge of this machine, right about where there appears to be a plastic 'grill' or something. With OI Hipster, however, it feels a wee bit warm after several hours of being on, but not nearly warm enough to cause me worry. (I wish I could report actual temperatures for the sake of scientific comparison, but this laptop tends to squirm and wriggle away at the sight of a thermometer.)

Ultimately, I can't say for certain that the lower temperature is a result of the current choice of OS, but nevertheless the coincidence seems too strong to ignore.

illumos + pkgsrc = the best of both worlds

One of the things that has kept me coming back to NetBSD time and again is the availability of certain increasingly-antiquated treats, particularly ones that only a fool for retro UNIX could adore. This includes many (if not all) of the classic window managers you'd ever want or need, including uwm, aka "The Ultrix Window Manager", from 1985, only for those who think twm makes for an appallingly decadent desktop experience, xearth (which turns the root window in Google Earth, though minus any interactivty whatsoever), as well as a decent assortment of games. 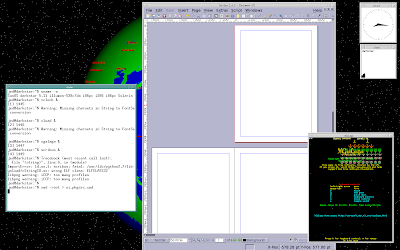 As NetBSD as you wanna be: Motif Window Manager (mwm), with xearth
running in the root window, as well as Scribus and xgalaga, courtesy of
SmartOS' pkgsrc repository

On the other hand, one of OpenIndiana Hipster's (current) drawbacks is that it is somewhat light on applications, and until this is rectified, pkgsrc goes a long way towards bridging that gap. For Yours Truly this would mean Scribus for desktop publishing and layout design, though I recall reading somewhere that an illumos-native build was in the works in a tool shed somewhere in sfe.opencsw.org.

The folks over at the SmartOS project have been working at maintaining a pkgsrc repository of pre-built binaries for those of us who just want to type $ sudo pkgin -y install xgalaga and be done with it. Just follow the prescribed directions, and keep in mind that if you're using gnome-terminal, you can copy and paste that long gobbledygook into your terminal session for accuracy and lower blood pressure.

Another beautiful thing about pkgsrc is that it allows me to run NetBSD packages, but much zippier. (I assume this is owing to the better hardware support on account of OI's ancestry in the commercial UNIX realm.)
Posted by James Deagle at 7:25 PM